Augmented Reality is present between us from decades now (invented in the year 1968 by Ivan Sutherland and Bob Sproull, they created first head mounted AR device), but we need to say this, AR is the new kingpin for all the upcoming cutting-edge technological platforms and devices. The whole modern world revolves around the aura of AR.

This technology is capable of expanding our physical world by leveraging powerful digital projections. To catch up with this trend, industries, and blue-chip corporations are learning how to amalgamate their business processes with AR to offer an unforgettable experience to their customers. Let’s dive in this interesting world and find out what this hype is all about?

AR technology adds digital details to our physical world. This platform adds layers of information to any real-world physical object by projecting digital graphics on it. Unlike virtual reality, it does not constitute an entirely different ecosystem, but it makes the existing physical object more interactive and informative.

Basically, it superimposes computer-generated graphics over any object, so it looks like a live projection. You must have played numerous smartphone games in which you open your smartphone camera to interact with projected animated characters; all these amazing applications are based on augmented reality. 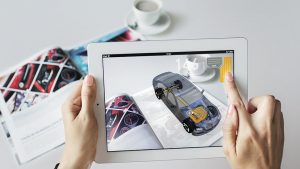 The image used for illustration purposes. Zeal AR is not the owner or creator of the image. (Image Source: tech.co)

Isn’t this technology will spark more futuristic innovations in the future? Definitely, it will. As our way of living is changing and shaping towards more digital lifestyle, we will be more using such things. All these things will make our lifestyle a “smartly organized lifestyle.”

Now, let’s deep dive into augmented reality technologies and find out how this amazing technology evolution works and what makes it so special and anticipating.

To understand the whole concept, first, let’s have a look at what are the main components which perform the whole process. There are mainly three components, which are:

The core components of any AR-based tool are the processor, sensors, input devices, and mainly the display. The display could be a smartphone, handheld device, smart glasses, or the head-mounted displays(HMD). The input devices are either cameras or webcams. Sensors included gyroscope and accelerometer. Mobile devices have all the required specification to run an AR application.

Special pieces of software like D’Fusion are integrated into the AR-based applications. The overlapping of digital projection over a real-life object is possible by leveraging using 3D software. These array of software are available for computers, and the smartphone app already comes with all the default package.

Cloud servers or a dedicated hosting platform is required to render and store the data. As per the request obtained from AR source, virtual images and projections are downloaded from the web or cloud server and shown via a smartphone. As the data generated in the process can be large, using a hosted service or cloud is preferred.

If we have a look at the working principle of AR, there are mainly three different operational grounds which are marker based, non-marker based and location-based.

You must have seen smart QR codes which gives information about any product like it’s pictures, brief description, and pricing, you just need to scan, and a 3d-based product will be visible, this comes under the marker-based AR applications. When you scan such QR or a barcode, a request is sent to the servers, and once the request is processed, the cloud server sends the respective image on the smartphone, and a user can view it with its description.

In addition to this, the marker-less AR technique recognizes objects which are not directly supplied to the application beforehand. This situation is complex as compared to other methods because the object recognition algorithm is executing in the AR application needs to identify item’s properties like color, a pattern that may exist in camera frames.

On the other hand, when the location-based mobile apps are pointed towards a physical view, the GPS matches the location with the stored digital location on the servers. Once the computer vision of the location is found, the smartphone fetches the data, and digital projection is shown to the user on the screen or the monitor. For the movements and orientations, sensors like gyroscope and accelerometer are used.

The image used for illustration purposes. Zeal AR is not the owner or creator of the image. (Image Source: Techcrunch)

The complete AR process comprises of majorly four steps. Let’s have a sneak peek into the AR process and understand what are the key checkpoints:

The very first thing which comes in the process is the core concept of the application. What are the main functionalities of the application, how the application will look, and how the user will interact with the interface are decided in this phase? 3d prototypes and blueprints are prepared based on the idea which will be used in the designing phase.

By leveraging the 2d blueprints and 3d prototypes as a reference, the engineer can design the complete flow of the application. The application screens, colour combinations, animation effects are implemented in this step. Once this step is complete, it gives a pretty clear idea of the app’s functionalities.

Once the complete design is ready, it’s time for integrating the whole concept into an AR app. The development phase of the app begins here, and the functionalities are integrated into the AR application. This process gives a powerful backend to the beautiful frontend of the app.

This is an advanced process in which the app can be made compatible with the available AR and VR devices to enhance user interaction. Once the app is integrated with the product, you can offer an unforgettable viewing experience.

We leverage the standard industry norms and cutting-edge technology & tools to deliver an excellent product to meet your requirement with perfection. Following are some of the modern tools we use to turn your idea into a beautiful reality. 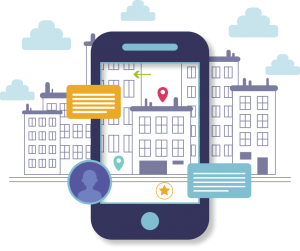 Some amazing key innovations of AR which you should know:

Hololens is a breathtaking innovation from Microsoft, which offers you a complete mixed reality experience. It is an excellent combination of VR headsets and the power of AR. Hololens comes with transparent glasses, which displays digital elements to the uses.

Companies are flaunting their products through augmented reality ar applications. In these applications, the user just needs to open the app, and he can project the product’s impressions to check out how the item actually looks. The greatest examples of this concept are the AR-based furniture applications where user can project different movables in their own place.

The skincare industry is no behind in trying their luck. Many popular brands have launched applications where the user can try different types of available makeups just like a filter.

All in all, we can conclude by saying this is just a teaser of what AR is capable of doing. In upcoming times, we will experience more breathtaking and innovative applications which will definitely make our lives more productive and enjoyable.

As we are progressing in this hyper-active digitized ecosystem, new and future-focused technologies...
Christmas is among the most cherished festivals that bring immense joy and happiness to family...